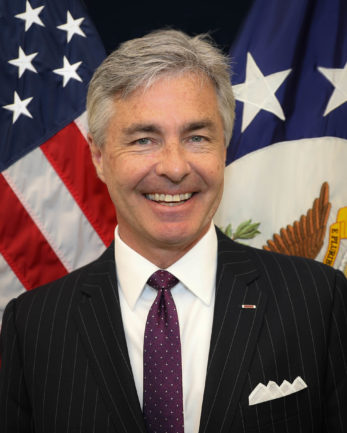 Ambassador Braithwaite recently concluded his service as the Regional Chief Executive of VHA/Vizient MidAtlantic and New England, LLC a member-owned hospital group purchasing organization serving hospitals and health systems throughout the greater eastern seaboard. He joined VHA in November of 2011 and led the merger of VHA East Coast, LLC with VHA Pennsylvania, LLC. In 2014, he led the merger with VHA Empire-Metro, LLC creating the greater VHA Mid-Atlantic Region. He is most proud of the fact that during his tenure this division went from last to first in overall sales revenue as well as both member satisfaction and employee satisfaction among all divisions of the company.

Ambassador Braithwaite is a 1984 graduate of the United States Naval Academy, Annapolis, Maryland and the first of his class selected for flag rank after only 21 years of military service. Qualified as a Naval Aviator, he flew anti-submarine warfare (ASW) missions tracking Soviet submarines throughout the Northern and Western Pacific Ocean regions as part of Patrol Squadron 17 and Patrol Wing 2. Other assignments during his military career included serving as a Special Assistant in the Navy’s Office of Legislative Affairs, U.S. Senate Liaison Office Capitol Hill; Director of Public Affairs aboard the aircraft carrier USS America (CV-66) with additional duty to the Commander, Carrier Group Two and Commander, Striking Force Sixth Fleet where he operated above the Arctic Circle; Chief of Public Affairs, to the Commander of Naval Base Philadelphia during the White House Base Closure Commission initiative; Commanding Officer, Fleet Combat Camera Atlantic (Reserve) deploying with this command as part of the initial invasion into Iraq in 2003; Director, Joint Public Affairs Support Expeditionary Element (Reserve), U.S. Joint Forces Command where he deployed to Pakistan and became Chief of Strategic Communications to the U.S. Ambassador, Islamabad with additional duty to the Commander, Combined Forces Command, Afghanistan; and finally as Vice Chief of Information for the United States Navy.

During periods of inactive service, Ambassador Braithwaite served as Manager of Operations, Atlantic Richfield Chemical Inc.; Executive Director & Senior Advisor to U.S. Senator Arlen Specter, (R-PA); Vice President of Government Affairs, for Ascension Health the largest healthcare system in the United States and Executive Director, Delaware Valley Healthcare Council, Philadelphia. He received his graduate degree from the University of Pennsylvania, Fels School of Government. Ambassador Braithwaite has also completed additional studies at the Naval War College in Newport, Rhode Island as well as courses at the Air Command and Staff College, Maxwell Air Force Base, Montgomery, Alabama. Ambassador Braithwaite has been awarded the Legion of Merit, the Defense Meritorious Service Medal, Meritorious Service Medal, Navy Commendation Medal, Navy Achievement Medal, and the Combat Action Ribbon. However, he is most proud of having been part of teams that received the Navy Unit Commendation, Joint Meritorious Unit Commendation and the Humanitarian Service Medal.

An avid sailor, sportsman and amateur historian, Ambassador Braithwaite is married to the former Melissa Losito of Marlton, New Jersey. They have two children, Grace and Harrison and before moving to Norway, they resided in Chadds Ford, Pennsylvania at “Twin Magnolias” a home built in 1741 and used by British General Lord Cornwallis as his staff quarters during the Battle of Brandywine in 1777.