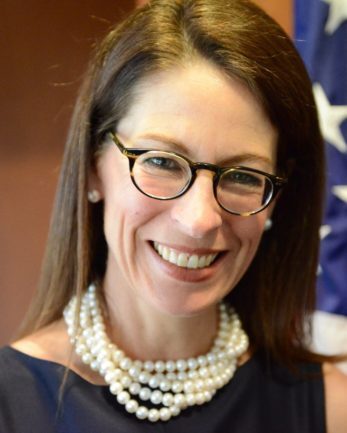 Sharon Hudson-Dean began her assignment as Chargé d’Affaires ad interim at the U.S. Embassy in Oslo, Norway on July 29, 2021. For the previous three years, she was U.S. Consul General in Sydney, Australia, leading a large team of U.S. interagency representatives focused on trade and investment, the strong security partnership, and support for the Indo-Pacific region in line with shared U.S.-Australian values and priorities. Prior to that, Ms. Hudson-Dean was the Acting Deputy Assistant Secretary for Nordic/Baltic Affairs and Public Diplomacy in the European and Eurasian Affairs Bureau at the Department of State (2017-2018). She served as Chargé d’Affaires, a.i. and Deputy Chief of Mission at the U.S. Embassy in Riga, Latvia for three critical years starting in 2014, during which the United States supported its Baltic allies with increased military engagements and the deployment of the NATO Enhanced Forward Presence battalions in the region.

A career member of the U.S. Senior Foreign Service with the rank of Minister Counselor, Ms. Hudson-Dean has over two decades of experience as an American diplomat and has represented the United States in Georgia, Russia, South Africa, Zimbabwe and Nepal. She also worked in the State Department’s Bureau of South Asian Affairs and as an American Political Science Association Fellow in the U.S. Senate. She holds a Bachelor of Science (Foreign Service) from Georgetown University and a Master of Arts degree in Political Communications from Johns Hopkins University. She is a lifelong skier and proponent of commuting by bicycle, and along with her three children enjoys travel, podcasts, and the performing arts.