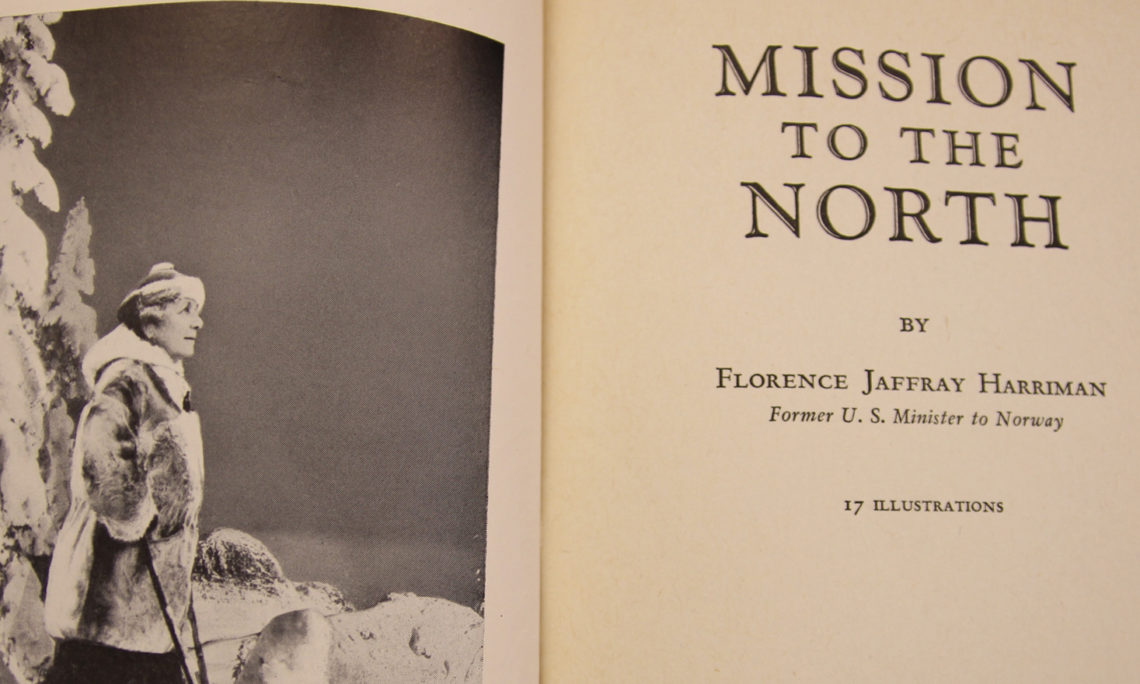 Mission to the North by Florence Jaffray Harriman

Florence Jaffray Harriman was Envoy Extraordinary and Minister Plenipotentiary to Norway from 1937 until 1940. (The United States chose to use the title Minister instead of Ambassador in several countries in Europe well into the 19th century.)

Harriman came to the country during a troubling pre-war period. On April 9, 1940, Germany invaded Norway. The Germans were slowed by coastal guns at Oscarsborg Fortress that managed to sink the German cruiser Blücher, which led the flotilla. This delay allowed Harriman and the rest of the American legation, along with members of the Norwegian royal family, to flee to Sweden.

En route, the United States suffered its first military casualty when Captain Robert M. Losey, a U.S. military attaché assisting the evacuation, was killed in a Luftwaffe attack on Dombås. In August Harriman assisted the evacuation of U.S. citizens through Finland. She sailed on the steamer American Legion from Petsamo with the Crown Princess Märtha and her children, who played outside on the ship in all sorts of weather, unaffected by seasickness, according to Minister Harriman.

Minister Harriman wrote all this down in a book called Mission to the North. She wrote about her experience as a Minister and head of the U.S. Legation to Norway, and about her escape from Oslo when Germany invaded. The book, published in 1941, was difficult to come by until former U.S. Ambassador Sam Heins talked to Google Norway about it, who arranged to have the book made available on Google Books.

Mission to the North, which shows the late 1930s Norwegian-American relationship through the lens of a smart, 65-year old suffragette socialite, is a product of its time, but also shows aspects of the relationship that continue today. She describes a close, easy-going and professional relationship, where diplomats could speak honestly to each other and with few risks of misunderstandings. Minister Harriman loved Norwegian nature and landscapes and made great efforts to see all of Norway. She traveled to the North Cape, to the Lofoten Islands for the codfishing season, and she wrote at length about the Vigeland statues in Frogner park. She admired the Norwegian dairy cooperative, Norwegian summer vacation habits, and Norwegians’ obsession with skiing and hiking.

On June 7th, The U.S. Embassy hosted a celebration of Mission to the North and the enduring Norwegian-American relationship. The Embassy’s Chargé d’affaires Jim DeHart spoke about Minister Harriman. ISF-researcher Helge Danielsen spoke about the Norwegian-American relationship in the 1950s, and about public diplomacy in that era. Ingeborg Bjur talked about how American art was used in diplomacy in the 1960s and into the 1970s. Ole O. Moen discussed American studies in Norway. Lastly, Karen Mosman of the American Women’s Club spoke about Americans living in Norway as a bridge between the U.S. and Norway. Ingeborg Bjur offered a wonderful anecdote: she said that a librarian working at the American Library in 1971, explained to an Aftenposten reporter that the Vietnam War protestors outside also often were patrons in the American library, on the inside. This really shows the multidimensional nature of the Norwegian-American relationship! See pictures here: