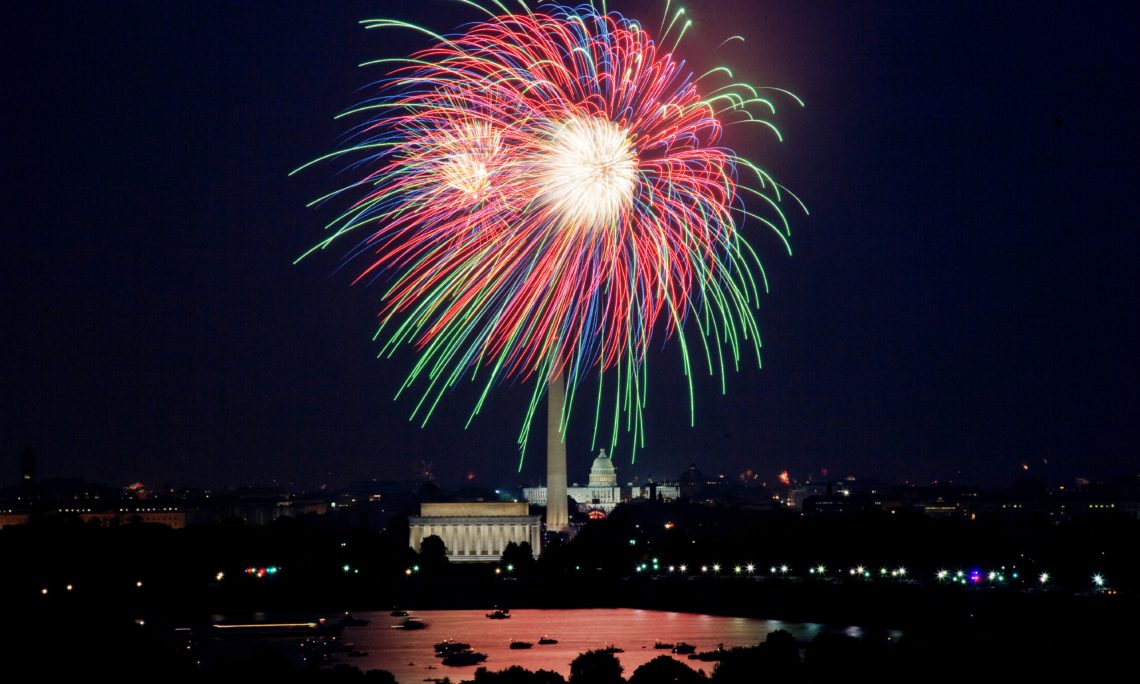 The United States celebrates its Independence Day on July 4, a day of patriotic celebration and family events throughout the country. In the words of Founding Father John Adams, the holiday would be “the great anniversary festival. It ought to be commemorated as the day of deliverance. … It ought to be solemnized with pomp and parade, with shows, games, sports, guns, bells, bonfires, and illuminations, from one end of this continent to the other, from this time forward forever more.”

The Fourth of July holiday is a major civic occasion, with roots deep in the Anglo-American tradition of political freedom.

Each year crowds of visitors flock to the National Mall — the grassy expanse between the U.S. Capitol and the Washington Monument — for the Smithsonian Folklife Festival, which always takes place on two weekends overlapping the Fourth of July holiday.   This year’s festival celebrates Mexico, Asian-Pacific-American culture, and the work of Smithsonian researchers, curators and other specialists.  In 2009, the festival’s international exhibits focused on the music of Latin America and the culture of Wales.

Throughout the United States, Fourth of July fireworks displays are popular, from the spectacular exhibition on the National Mall to more modest fireworks shows in city parks across the land.  In New York City, Macy’s department store sponsors what it bills as the nation’s largest July 4 fireworks display. In 2010, the 30-minute show will feature 40,000 shells launched from six barges afloat in the Hudson River. Macy’s estimates that more than 3 million will watch in person and that millions more will see it on television.

“The Fourth” is a family celebration. Picnics and barbeques are common. July is summer in the United States, and millions of Americans escape the heat at beaches and other vacation spots.  Independence Day is not among the legal holidays fixed on a Monday or Friday, but many employees use vacation time to create an extended weekend.

Construction of important public works sometimes begins on July 4. The Erie Canal, Washington Monument and Baltimore and Ohio Railroad (the nation’s first) all broke ground on Independence Day. The date reflects a desire symbolically to stamp these projects as true civic improvements.

The Fourth of July is a time when elected officials and other public figures often give speeches extolling American traditions and values.

Independence Day has provided some of this nation’s most stirring words of freedom. In 1788, Founding Father James Wilson addressed a Philadelphia gathering that was possibly the largest July 4 celebration in the young nation’s history. He exhorted his fellow citizens to ratify the proposed Constitution. “A people, free and enlightened,” he said, “establishing and ratifying a system of government … A WHOLE PEOPLE exercising its first and greatest power — performing an act of SOVEREIGNTY, ORIGINAL and UNLIMITED.”

On July 4, 1852, the black journalist and abolitionist Frederick Douglass decried the evils of slavery, still prevalent in the American South at that time, but identified forces “drawing encouragement from the Declaration of Independence, the great principles it contains, and the genius of American Institutions in operation” that “must inevitably work The downfall of slavery.”

Ninety years later, near the darkest moments of World War II, President Franklin D. Roosevelt reminded the nation that for the “weary, hungry, unequipped Army of the American Revolution … the Fourth of July was a tonic of hope and inspiration. So is it now…. The tough, grim men who fight for freedom in this dark hour take heart in its message — the assurance of the right to liberty under God — for all peoples and races and groups and nations, everywhere in the world.”

President Obama in his 2009 Fourth of July message celebrated “the indomitable spirit of the first American citizens.”  He called on people to “remember how unlikely it was that our American experiment would succeed at all; that a small band of patriots would declare independence from a powerful empire; and that they would form, in the new world, what the old world had never known — a government of, by, and for the people.”

Across the nation, civic leaders of even the most humble station echo these words, and their audiences give thanks for the freedom and liberties that the founding generation won for all Americans.