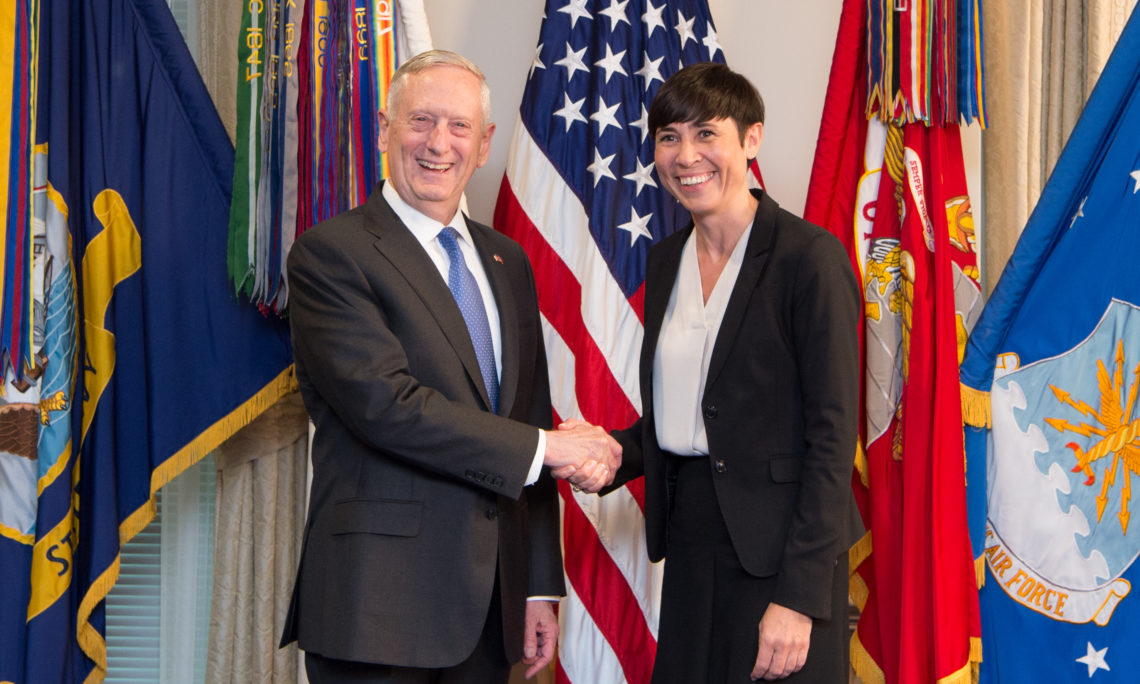 WASHINGTON, May 18, 2017 — Defense Secretary Jim Mattis yesterday met with Norwegian Minister of Defense Ine Eriksen Søreide at the Pentagon, where he praised the longstanding defense relationship between the United States and Norway, according to chief Pentagon spokesperson Dana W. White.

Mattis and Søreide reaffirmed the extensive military-to-military cooperation between the U.S. and Norway as NATO allies that have resulted in effective combined operations on the battlefield, White said.

White said the secretary also thanked the minister for the opportunity for a limited U.S. Marine Corps rotational force to conduct cold-weather training in Norway to strengthen readiness and interoperability.

“Norway, from our perspective on this side of the Atlantic, is an essential NATO ally with invaluable expertise in the North Atlantic and the Arctic, and we want to thank you for sharing that expertise with us, and for supporting the U.S. Marine Corps cold weather training taking place today in Norway,” Mattis told Søreide.

White said the secretary thanked the minister for Norway’s commitment to international security, including its significant contributions to NATO’s Resolute Support mission in Afghanistan, the defeat-ISIS campaign and its leadership on security in the Nordic-Baltic region and the North Atlantic.

“You are absolutely right in the fact that we are strengthening our relationships,” Søreide told Mattis. “We are entering into cooperation that will only deepen in the years to come, and we have a longstanding history of decades of cooperating in crucial areas, where I think that we can say that we mutually contribute to things that we could not do alone.”

The secretary encouraged the minister to continue efforts to meet the two percent of GDP spending pledge for all NATO members, White said.

See a video from the meeting: