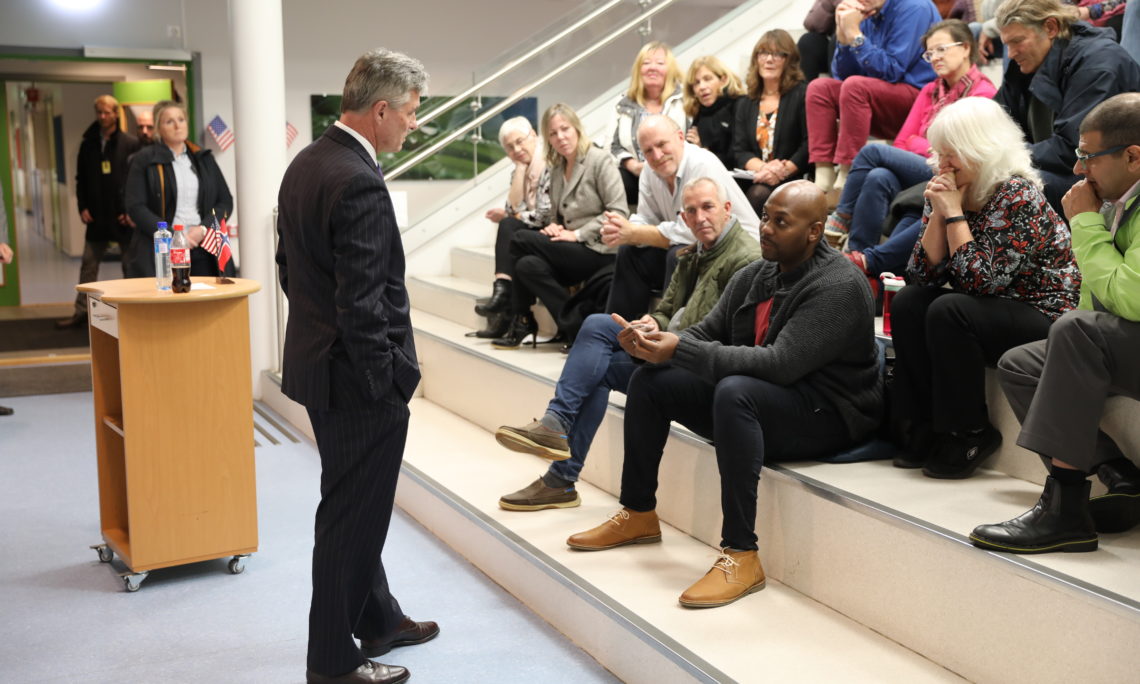 On November 13, 2018, Ambassador Kenneth J. Braithwaite met with approximately 70 U.S. citizens at the International School in Kristiansand.  The Embassy’s American Citizen Services unit hosted an informal event titled An Evening with the Ambassador, in order to provide a forum for Americans in Norway to come together to meet Ambassador Braithwaite and to share information, opinions, and concerns.

After an introduction by the Consul, William Whitaker, who had assisted U.S. citizens throughout the day to provide limited Consular services, Ambassador Braithwaite discussed the close relationship between the U.S. and Norway.  In his remarks he outlined the missions main goals, which is to provide assistance to U.S. citizens in Norway, and our enduring commitment to strengthening our bilateral relationship through continued partnership and cooperation.  He also talked about the high priority that he places on open meaningful communication with the U.S. citizen community in Norway, and to building lasting ties through people-to-people relationships.

The Ambassador dedicated the last half of the event to answering questions from citizens in the audience.  Ambassador Braithwaite and William Whitaker addressed questions on a range of topics including citizenship, American politics, and consular services.  After the program ended, the Ambassador stayed to shake hands and take photos with everyone.

Connecting with the U.S. Citizen Community is important to Ambassador Braithwaite and to the American Citizen Services unit.  We hope to hold similar events in the near future, and we welcome you to join us.