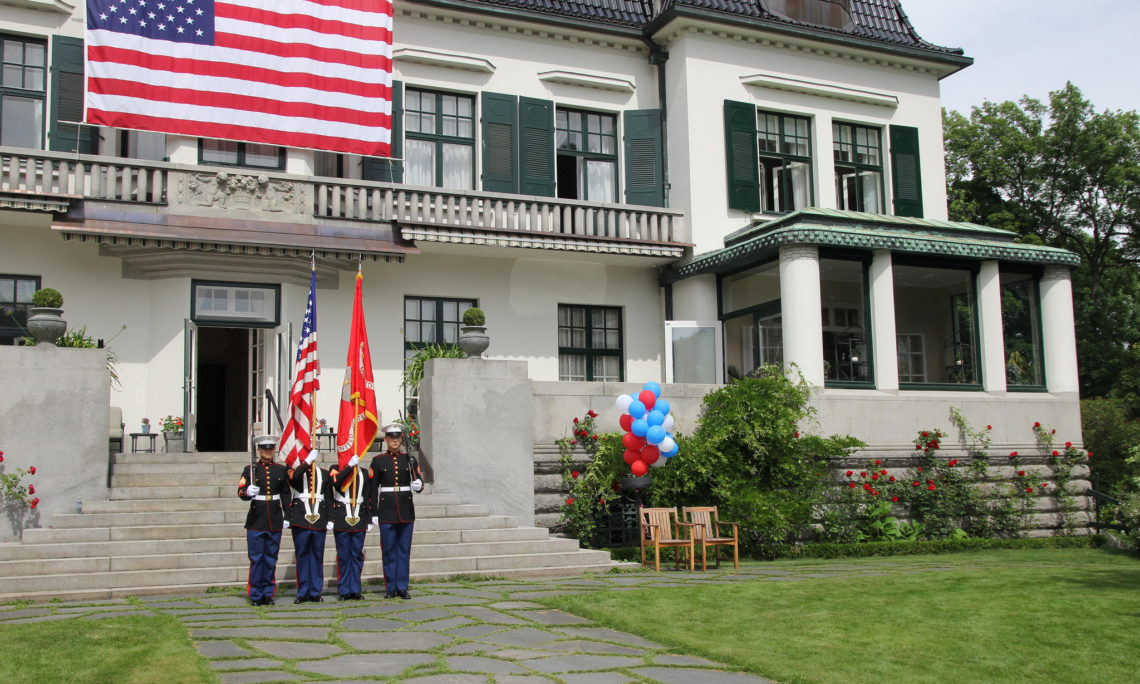 The Ambassador’s Residence in Oslo; Villa Otium, built in 1911, was designed by renowned Norwegian architect Henrik Bull for Hans Andreas Olsen, the Norwegian Consul General at St. Petersburg and his wife Ester, the niece of Alfred Nobel. The building’s grand scale and opulent detail speak of the wealth the family acquired in the petroleum business in Czarist Russia. Mr. Olsen and his family moved in around Easter of 1912. The United States Embassy to Norway has therefore chosen to celebrate 2012 as the 100th anniversary of the house, and in this connection produced the commemorative booklet “Villa Otium – A Diplomatic Home” (PDF – 2.9 MB).

The three-story villa is stylistically Art Nouveau, or Jugendstyle. The asymmetrical, yet balanced composition is elegantly drafted. Bull, who also designed the National Theater and the Historical Museum in Oslo, was Norway’s leading architect at the turn of the nineteenth century. The Villa Otium represents his most important residence.

The surrounding garden preserves the connection of architecture and nature even though now reduced in size by three-quarters. The property comprises the old “Otium,” or park meant for leisure. Mrs. Olsen sold the property to the United States Government in 1923 — the $125,000 price reportedly making it the most expensive American residence abroad at the time and requiring Congressional approval. The United States Legation moved to its new home in January of 1924. A significant portion of its furnishings was purchased from Jacques Bodart in Paris.

The Norwegian Preservation Agency has identified the Villa Otium as significant historical architecture.