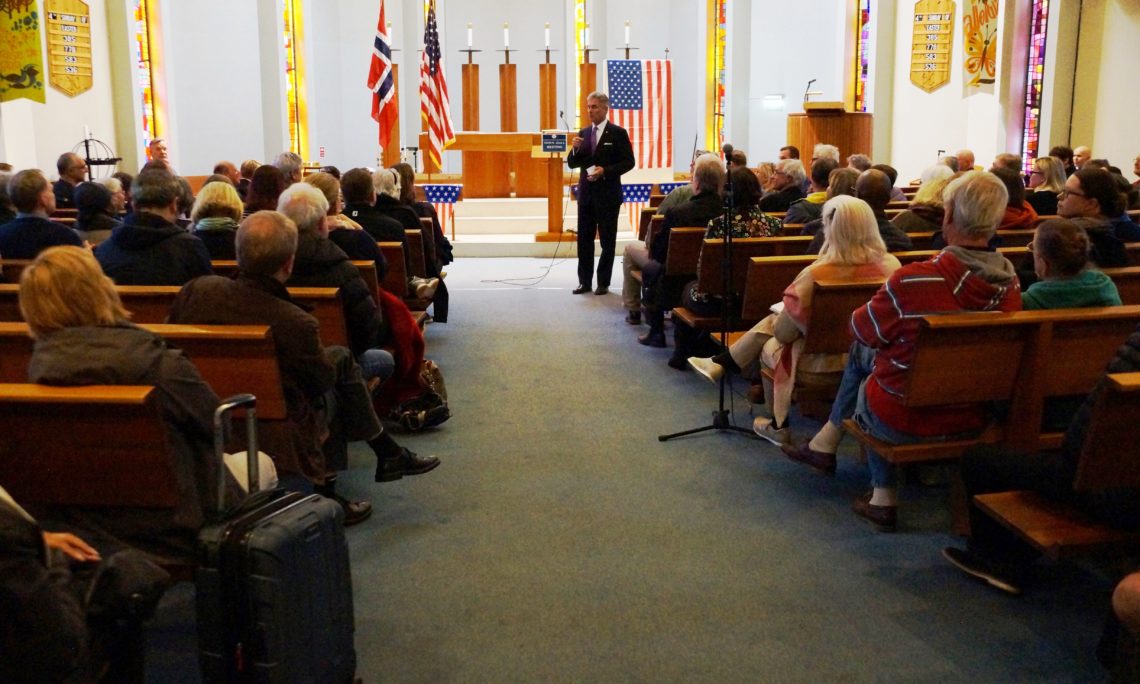 On April 24, 2018, Ambassador Kenneth J. Braithwaite met with U.S. citizens at the U.S. Embassy Town Hall Meeting in Oslo.  The Embassy’s American Citizen Services unit hosted the Town Hall meeting at the American Lutheran Church in order to provide a forum for Americans in Norway to come together and share information, opinions, and concerns.

Starting out the evening, Consul Bill Whitaker discussed the Embassy’s work with Norway’s U.S. citizen community.  Vice Consul Max Krafft then outlined the importance of voter registration for citizens living abroad—specifically all of the resources that can be found online at FVAP.gov—so that their voices are heard during the U.S. mid-term elections later this year.  The Embassy’s Regional Security Officer addressed general safety guidelines, and a guest speaker from DnB Bank discussed international tax reporting as it relates to U.S. citizens with Norwegian bank accounts.

The presentations were followed by a lively Q&A session where the audience asked questions, voiced opinions, and offered suggestions to Embassy staff on a range of topics.  Ambassador Braithwaite then spoke, introducing himself and outlining his priorities as Ambassador, including his commitment to open communication with the U.S. citizen community in Norway.  Ambassador Braithwaite also answered questions from the audience on a host of topics.  Civic organizations such as the American Coordinating Council of Norway, American Women’s Club, Democrats Abroad, and Republicans Abroad were also available to represent their organizations and answer questions.  Embassy staff assisted citizens with Social Security questions and other issues such as dual nationality, and voter registration.  Following the formal presentations, participants were invited to enjoy freshly-baked American cookies, meet one another and socialize.