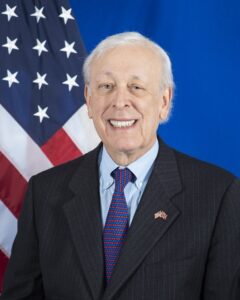 Marc Nathanson was accredited as U.S. Ambassador to the Kingdom of Norway on June 16, 2022.  He was one of America’s leading communications entrepreneurs and is a noted environmentalist.  He founded Falcon Cable TV in 1975, and in 1999, he became Vice Chairman of Charter Communications.  Before his appointment as Ambassador, he was Chairman of Mapleton Investments, a holding company.

Nathanson was Chairman of the United States Agency for Global Media during the Clinton-Gore and Bush-Cheney Administrations.  He was appointed by Secretary of State Hillary Clinton in 2012 as Representative to the Board of Governors of the East-West Center in Honolulu.  Nathanson is the immediate past Co-Chairman of the Pacific Council on International Policy and Vice Chairman of the National Democratic Institute for International Affairs (NDI).

He is a long time Trustee of the Aspen Institute and a member of the Council on Foreign Relations.  Nathanson has been honored by several environmental organizations for his work on water conservation.