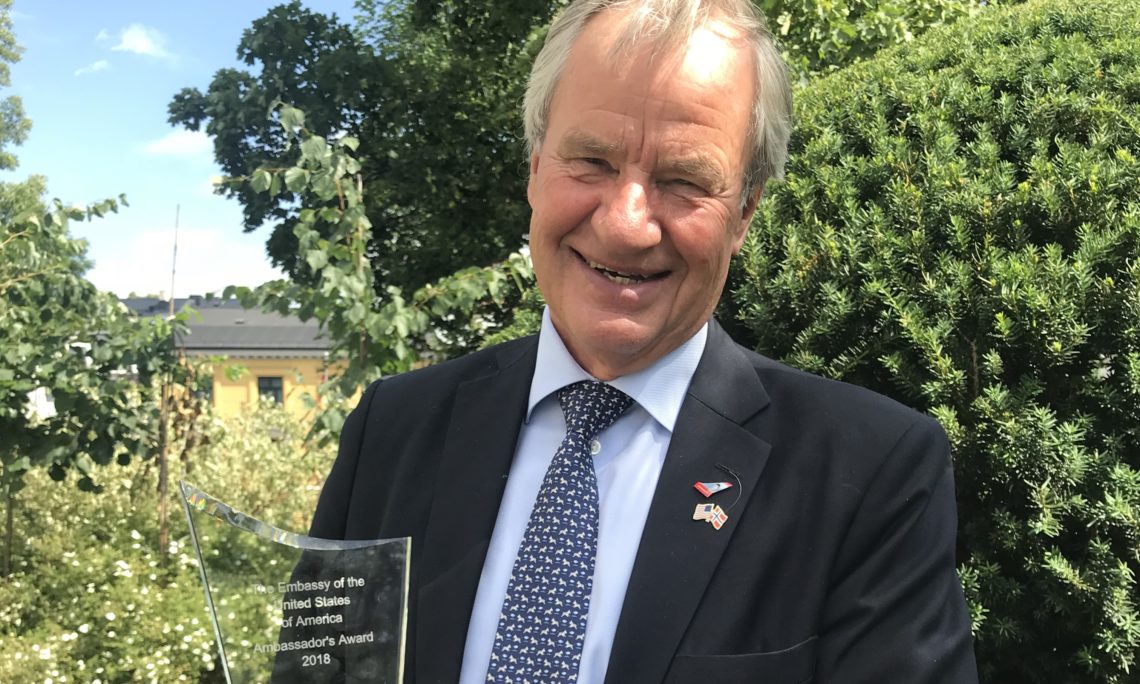 On June 28, 2018, at the U.S. Embassy’s annual Independence Day Celebration at the Ambassador’s Residence in Oslo, U.S. Ambassador to Norway Kenneth J. Braithwaite presented the newly established Ambassador’s Award to Norwegian Air Shuttle CEO Bjørn Kjos. A group of NTNU students received the Ambassador’s Young Eagles Award for their project to remove plastics from rivers before they reach the ocean.

Strengthening Ties One Passenger at the Time

Mr. Bjørn Kjos was awarded the 2018 Ambassador’s Award in recognition of his work to strengthen the ties between Norway and the United States, one passenger and one airplane at the time. As the founder and CEO of Norwegian Air Shuttle, he has played a key role in connecting the peoples of the United States and Norway and growing our two economies.

The recipients of the Ambassador’s 2018 Young Eagles Award were Norwegian University of Science and Technology (NTNU) students Emilie Dahl, Jonas Hopsdal, Ingeborg Lie Monsås, Fredrik Samdal Solberg and Sindre Sætre Hammerlund. It was awarded in recognition of their entrepreneurial spirit and technological creativity in seeking a solution to marine plastic pollution.  The group’s award-winning project of removing plastics from rivers has received a great deal of attention nationally.  “With the Young Eagles Award, we are recognizing the sustainable innovation and technological accomplishments of this group of talented NTNU students. The United States shares the global concerns regarding marine debris, micro plastics, and the growing stream of mismanaged solid waste, and is committed to lead action to address these issues bilaterally and in international fora,” said Ambassador Braithwaite.