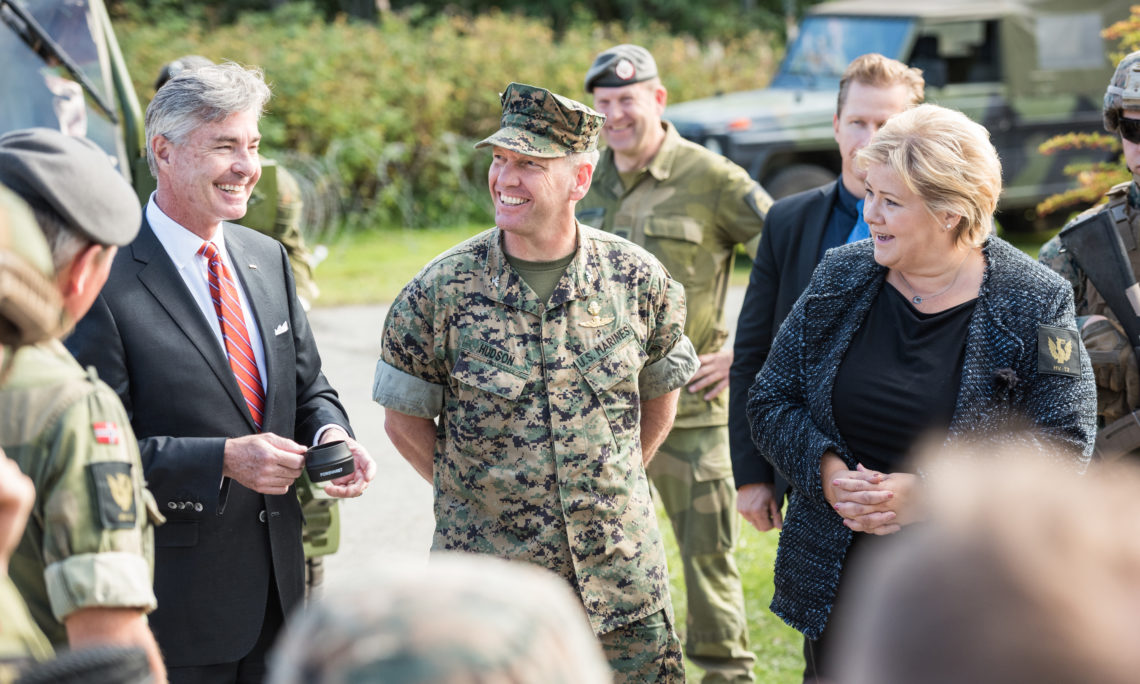 On Tuesday, September 11, 2018, Ambassador Ken Braithwaite and Prime Minister Erna Solberg visited U.S. and Norwegian soldiers stationed at Værnes.  Ambassador Braithwaite praised the importance of the excellent cold-weather training that the U.S. Marines are getting in Norway.  The Prime Minister noted that the cooperation at Værnes was good and helped to strengthen the Armed Forces of Norway.

Ambassador Braithwaite was hosted by Officer in Charge, Marine Coordination Element – Norway, COL Burl Hudson.  The Ambassador toured the facilities built to house U.S. and Allied soldiers during the upcoming Trident Juncture 2018 exercise.  He also had lunch with a group of U.S. Marines, who described the training they had received, their close cooperation with Norwegian soldiers and the conditions in Værnes.  The Ambassador thanked them for their service and noted the value that lessons they have learned in the Marine Corps would have for their future endeavors.  The Ambassador also stopped by the in-processing center that is the first stop for Marines and other troops coming to Norway for cold-weather training or Trident Juncture.  An impressive operation!

The United States is grateful to Norway for hosting the U.S. Marine rotational force.  The limited rotation of U.S. Marines in Norway benefits both countries by allowing forces to train together in cold weather conditions.  This opportunity has been very positive for the Marine Corps as it has improved their cold-weather readiness and interoperability with Norwegian forces.